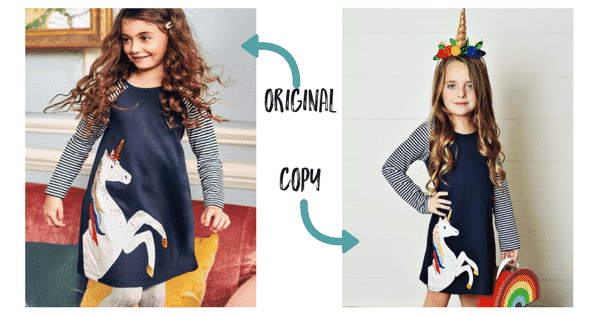 The fashion world is no stranger to knock offs and counterfeits. For years brands like Coach, Louis Vuitton, and Nike have battled the whack-a-mole game of taking down counterfeits that infringe on their trademarks. The growing popularity of Aliexpress has made that more and more difficult. While Aliexpress has cracked down on obvious trademark infringement, there is a growing exploitation of the grey area of snatching designs and producing copycat products. Online boutiques are popping up left and right. Your Facebook Feed is full of ads for products that look legitimate, but are being shipped from China (this was a HUGE problem with Fake Fingerlings over the holidays). The images that they use are often the same as the original brand and they claim a big savings. The posts are heavily sponsored, widely shared and commented on. Now smaller, high end brands are falling victim to these copycats. What’s even worse is that there are marketplace-type sites like Jane.com that feature the items as “deals” on their sites. While this post is about a particular popular Boden Unicorn Dress, the practice itself if becoming more widespread and threatening more brands than ever.

There are a number of different arguments for buying or not buying a knock off brand. Previously, it took several months or more for Boden‘s designs to be copied an distributed. Now, current season items are appearing almost as soon as the brand is loading their own releases. Personally, I buy Boden because I love the quality, originality in design and creativity of the brand. I will not buy copycats for the following reasons:

What to Watch for When Considering Buying Boden Knockoff Designs?

If stealing designs isn’t bad enough, the sellers often tend to be disingenuous in their product offering. 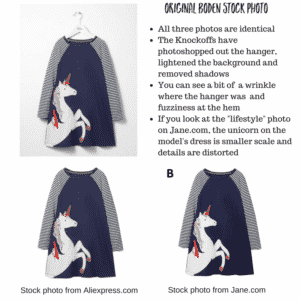 What does Jane.com have to say about the use of inaccurate photos?

I did reach out to Jane regarding the item and images and received the response below. They allow their sellers to use lie flat images from the original designer, even when the original design is not what is for sale. Overall they feel the listing is fine because several sellers are selling this dress, not just Boden. Huh? The everyone else is doing it defense? Boden only sells their own original designs. All images shown on the Jane.com listing should be of the actual product, not the product they are copying. 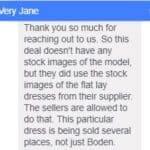 Overall, I am extremely disappointed with Jane.com and their defense of the cheap Boden knockoffs. While I have shopped and featured their deals in the past, I will no longer shop the site or share their deals. After some more quick research, I found that MANY of the items offered are easily found on Aliexpress for a fraction of the price. So maybe you’ll see more Ali deals from me.